To read the full Opposition to The Securities and Exchange Commission's motion for protective order click here or view on Scribd below.

The Commission’s case against Fr. Emmanuel is unprecedented... Ligand and its counsel’s role in this enforcement action—and the Commission’s reliance thereon—is troubling"

In reference to The SEC reliance on Ligand's demonstrably false assertions
Opposition to SEC's Motion for Protective Order, January 7, 2020 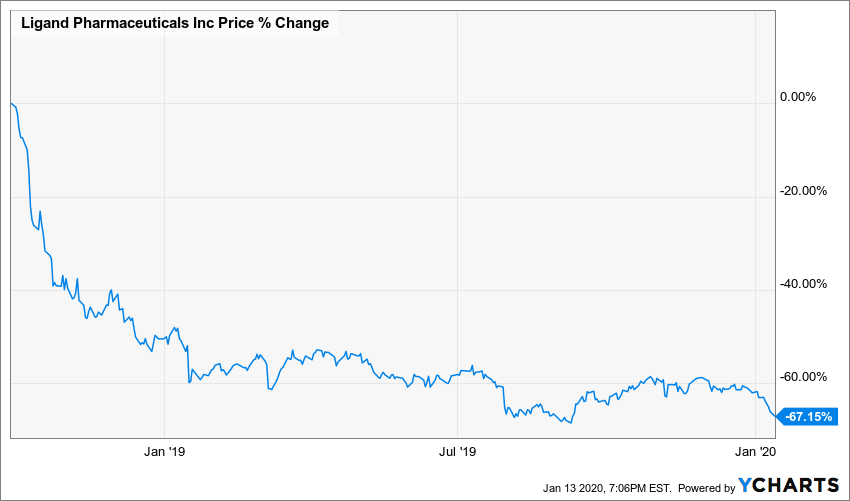 His December 2016 letter to the U.S. Senate Special Committee on Aging, regarding the company, is available online here 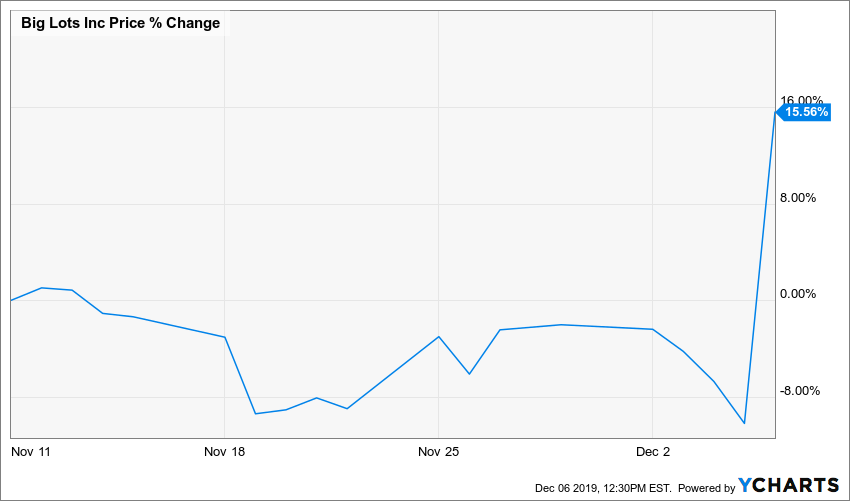 Between November 8 and 11, 2019, Lemelson Capital Management, on behalf of its investors in The Amvona Fund, LP initiated a long position in close-out retailer Big Lots.   Shares had been down more than 50 percent since late April 2019, with over 20 percent of the shares sold short as of the last reporting period.

In early trading today, shares of Big Lots soared over 29 percent after the company said it swung to a third-quarter net profit of $127 million, or $3.25 per share.  The company's CEO Bruce Thorn commented, "After a year of restructuring and transition in 2019, and despite the ongoing impact of tariffs, we expect to return to EBIT and EPS growth in 2020, including a significant improvement in normalized free cash flow."

As of publication, The Amvona Fund, LP is on track for a record performance in 2019. 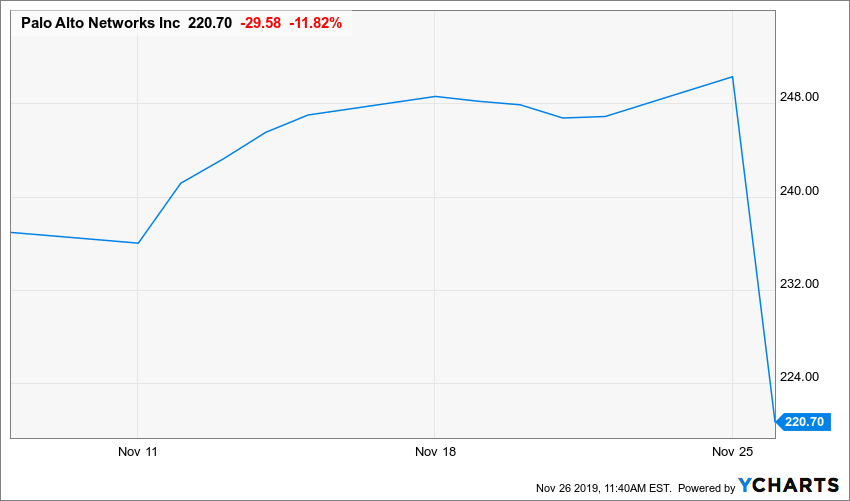 On November 8, 2019, Lemelson Capital Management, on behalf of its investors in The Amvona Fund, LP initiated a short position in shares of Palo Alto Networks.

In early trading today, shares of Palo Alto Networks plummeted nearly 12 percent after the cybersecurity company gave an outlook for its current quarter that was below Wall Street estimates and provided a disappointing profit outlook.

Separately on November 21, 2019, Geospace Technologies announced that the company's Vice President and Chief Financial Officer Tom McEntire would be "retiring" at a curiously young age. Lemelson Capital management previously called for Mr. McEntire's removal from the company. To read Rev. Fr. Emmanuel Lemelson's full letter to the board of directors of the company, click here.

Ligand’s shares continue to plummet following a catastrophic earnings report released on November 5, 2019, after the market closed.[1]  The collapse continued a trend, seen in recent months, that has led to a decline of as much as 70 percent in Ligand's share price since late September 2018 and destroyed billions of dollars in shareholder value, even as markets recently achieved record highs.

Fr. Emmanuel's publicly available research and commentary have charted alleged fraud and regulatory abuses at Ligand Pharmaceuticals spanning multiple years. Lemelson has made over 1000 allegations, including business accounting and securities fraud perpetrated by Ligand, including abuse of the Orphan Drug Act of 1983, in collaboration with purported "licensees," to increase the price [2] of drugs in poor and developing countries.

"Exploiting the sick, the poor and the vulnerable, to enrich executives is unacceptable," said Lemelson.

"We've been buying it aggressively, [Bed Bath and Beyond]..."

Shares of Bed Bath & Beyond soared as much as 24% in extended trading today after the company announced Mark Tritton would become its new president and CEO effective Nov. 4.

Listen to Fr. Emmanuel live on August 12, 2019, speaking about his aggressive purchases of the stock, which closed that day at $8.28 per share.

Disclosure: Lemelson Capital Management is long shares of Bed Bath and Beyond on behalf of its clients.

"Ligand is only one market correction away from collapse which will leave investors and employees defenseless. Regulatory watchdogs have been asleep at the gate failing once again to detect and prosecute fraud and abuse,"

On October 15, 2018, global financial media outlet Barron’s reported that the SEC had charged Fr. Emmanuel Lemelson, “accusing him of making false statements,” about Ligand Pharmaceuticals and making $1.3 million in profits by "driving down and betting against," the stock of the company. According to Barron’s, Lemelson condemned the SEC case as ”an effort to destroy the reputation of a whistle-blower.”

In the ensuing ten months, shares of Ligand Pharmaceuticals (NASDAQ: LGND) plummeted as much as 70 percent, recently reaching a new 4-year low and destroying billions of dollars in shareholder value.

Lemelson Capital Management recently published a reliably-sourced, abridged history of Fr. Emmanuel's work as an activist investor, including his battle with US regulators over his Ligand short.  To learn more click here.

"We've been buying it aggressively, [Bed Bath and Beyond]... probably it will be a take-out target, I mean, either a PE firm or it could be Amazon (NADAQ: AMZN),"

Shares of Bed Bath & Beyond (NASDAQ: BBBY) spike after The Deal is said to report the retailer hired Goldman Sachs to help it explore bids. The report hasn't been confirmed by the company or any other sources.

Listen to Fr. Emmanuel live on August 12, 2019, speaking to the crew of Benzinga about the possibility of an acquisition of the company.

Disclosure: Lemelson Capital Management is long shares of Bed Bath and Beyond on behalf of its clients.

Listen to Fr. Emmanuel live on August 12, 2019, speaking to the crew of Benzinga about markets, Ligand Pharmaceuticals (NASDAQ: LGND) extraordinary share price collapse as well as the following securities:

Disclosure: Lemelson Capital Management is short shares of Ligand Pharmaceuticals on behalf of its clients.

Shelburne, VT, July 30, 2019 -- Lemelson Capital Management (LCM), a private investment management firm, today announced that it had increased its short position in Ligand Pharmaceuticals (NASDAQ: LGND). The firm today also called on the US Attorney’s office for the Southern District of California to investigate Ligand for alleged criminal violations of federal securities laws amidst what LCM has called SEC failures.

LCM’s 2014-2018 research and commentary charted the alleged fraud. As of today, Ligand’s shares continue to plummet,[1] contributing to a drop in the share price of as much as 65 percent since late September 2018 and destroying billions of dollars in shareholder value, even as markets recently achieved record highs.

Sadly, investors have been ruined by Ligand’s alleged scheme while the SEC has ignored the red flags and botched opportunities for a proper investigation of the company,” said Lemelson Capital’s Chief Investment Officer Fr. Emmanuel Lemelson."

The Fund’s short position in Ligand Pharmaceuticals (NASDAQ: LGND) and Long position in Geospace Technologies (NASDAQ: GEOS) contributed to the returns.  During the period, The Fund continued to expand its investor base.3

“Our short position in Ligand and long position in Geospace Technologies are playing out as predicted, with the share price of Ligand continuing to crumble in the first half of 2019 and recently trading near a two-year low, while Geospace Technologies approaches a two-year high,” said Lemelson Capital’s Chief Investment Officer Fr. Emmanuel Lemelson.

Through various research reports and media interviews, LCM has made nearly 1000 factually accurate allegations concerning Ligand, including claims of business, accounting and securities fraud, most borne out by subsequent events to an extraordinary degree, including Lemelson’s public commentary in July 2018, that Ligand’s shares were set to “collapse.” Ligand’s stock, consistent with LCM’s analysis, has plummeted as much as 63 percent since late September 2018 and traded near a two-year low of $98.56 per share as recently as January 16, 2019.

“We believe Ligand is a zero, and after covering our highly successful short positions in the company in both 2014 and 2015, we intend to continue to ride the current profitable short position all the way down,” Lemelson added.

Listen to Fr. Emmanuel live on May 13, 2019, speaking to the crew of Benzinga TV about the US-China trade war and the following securities:

Lemelson Capital Management... by on Scribd

Bed Bath and Beyond (NASDAQ: BBBY) rocketed over 28 percent higher today March 26, 2019, climbing over 54 percent since Fr. Emmanuel spoke live to the crew of Benzinga TV on December 28, 2018, about the company, saying:

"It's [BBBY] now between $10 and $11 per share, pretty extraordinary business if you think about it, about a 1.4 billion market cap., just over a billion of that in cash, and then a company that threw off $750 million in free cash flow... in the last twelve months... growing revenues for a very long time, an iconic American retailer... they're paying almost a 5% dividend... for the record I think it's worth more like $40 or $50 and I wouldn't be surprised if in the next year we see it return to that sort of valuation... " 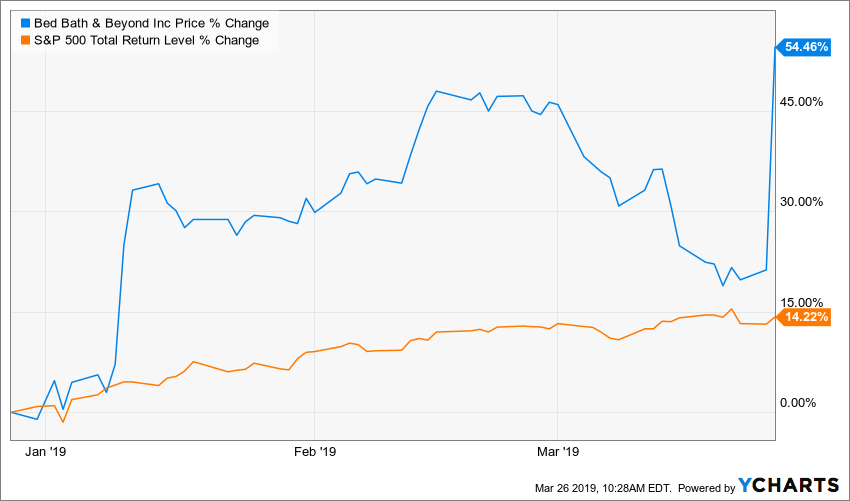 ...the company faces it biggest existential threat in what is likely to be a momentous impairment of its largest royalty generating asset, Promacta,"

Now on the left side of this chart, with Promacta...  the inevitable patent termination, product comes off patent sales decline and they will go to zero"

Shares of Ligand Pharmaceuticals (NASDAQ: LGND) continued its downward spiral, plunging almost 13 percent in early trading today, March 6, 2019, falling as much as 63 percent since September 30, 2018 and hitting a 2-year low.  Yesterday after market close the company reported it was disposing of its single-largest asset, the 25-year-old Promacta, stating in part:

We do not control the IP and some of the initial patents come off as early as 2021," (referring to the event as a 'patent cliff').

When it [Promacta] does royalties are expected to quickly diminish significantly... when off patent, the following year the company estimated it could lose over $125 million of revenue," 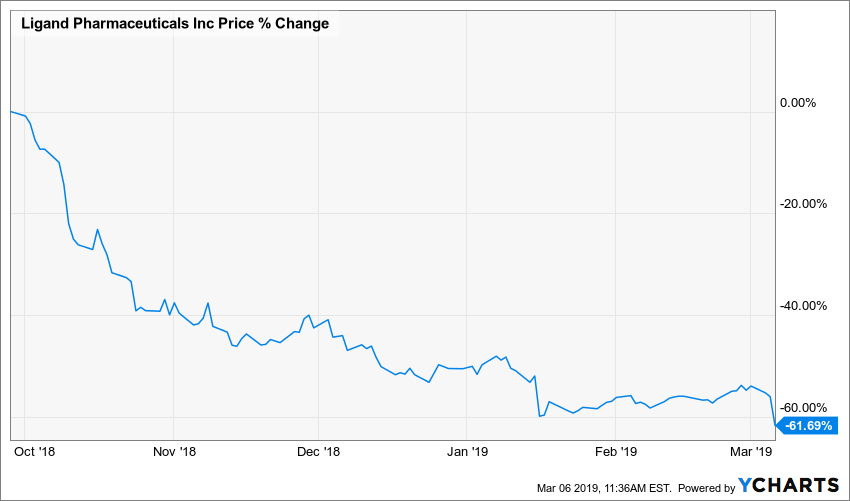